Do you agree that the IELTS exam is conducted to assess your competency in the English Language? Whether it’s a vocabulary part or speaking fluently in English, every aspect of the candidate is thoroughly evaluated. Then do you think that memorized questions and answers will be acceptable? Of course, it’s a big NO!

For the writing task, the candidates usually use memorized sentences and phrases excessively while writing an essay. This pattern and structure of writing an essay in IELTS test are definitely not approved by the examiner, which obviously negatively affect your IELTS band score.

If you are consistently using those repeated sentences or phrases while framing your essay even while practising the mock test papers, then STOP using it from now onwards. 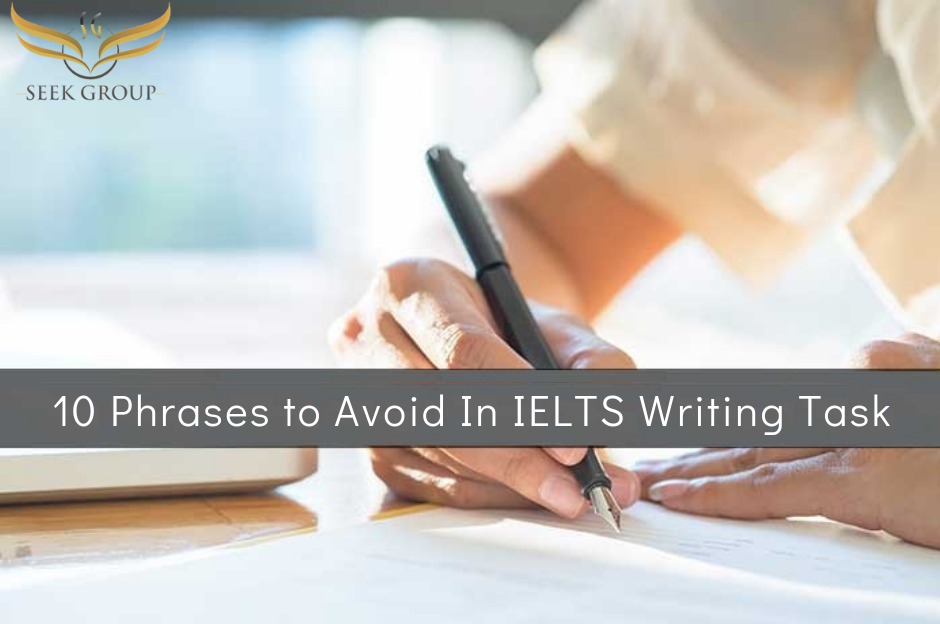 To not to use those recurring sentences in your writing task, take a peek at the below listed 10 phrases that every candidate should avoid in IELTS writing part.

The phrase like “Since the beginning of time...” is absolutely incorrect to use it in the sentences because nobody exactly knows when the time actually began. Therefore, there’s no worth of using such senseless phrases into your essay writing task in IELTS.

To begin with the essay writing task, the majority of applicants use the phrase “With the development of Science and Technology” because maybe that easily fits into the sentence structure. However, this is certainly an overly used phrase, which keeps the examiner in a perplexed state that what you are trying to say.

The phrase “It cannot be denied...” is employed in a sentence to give opinions and thoughts about the particular topic/issue. But due to its increased use in IELTS writing task, maybe the aspirants are just using it for the sake of framing an essay and not to understand the genuine meaning behind the phrase. Even the examiner will understand what you are trying to say, but due to the lack of correct words and ideas, it may not be considered as an impactful phrase.

In IELTS writing task, the framing of an essay should be in a manner that it should compel the reader/examiner to read it till the end without even losing the interest. If you try to use “As we all know...” phrases into your essay writing, then it will assuredly bore the reader because usually, individuals are always in disparities.

While framing the essay for IELTS writing task, we usually employ the phrase “This is a highly controversial issue...” Don’t repeat that phrase or sentence again! The majority of questions that are being asked from the IELTS candidates are not controversial.

These phrases or sentences are used too often by the IELTS aspirants. Rather than using such phrases, why don’t you go for something natural?

Don’t use the memorized sentences or phrases just like “It can broaden a person’s horizon”, which is definitely written in every other writing test. Instead of using such memorized phrases, why don’t you try something like “developing a deeper understanding of....” or “immense Learning” etc.

Yes, even this is an overly used phrase, which doesn’t prove its validation. When there’s no proof of the authenticity of the research or survey, then do you think that using it in an IELTS test will be beneficial? NO!

Again in the conclusion part, the candidates use such typical phrases to end their essay, which should be avoided. Without using the memorized phrases, you can conclude your essay with the main pointers.

To write an amazing essay without using the recurring phrases, idioms or sentences, you should contact the IELTS experts at Seek Academy.

Seek Academy provides the best IELTS coaching in Delhi to its students while focusing on improving and enhancing their skills in the English language to ensure that the candidates score a higher band in their exam and at a reasonable program fee.